The Brindisi municipality of Latiano is located in the northernmost part of the region of the Salento. At around one kilometre from the town centre, in an olive wood, is situated one of the most interesting religious destinations of the zone: the Sanctuary of S.S. Maria di Cotrino, with the ancient Seventeenth century church which contains a miraculous fresco of the Blessed Virgin Mary. Later, in the XVII century a monastery was built which since 1922 has been home to the Cistercian monks of Casamari. The building, which has a simple architecture, contains many works of artistic and historical importance.

In the historical centre we find the Palazzo Imperiali, called the Castello, and the former Dominican Convent currently a museum hub containing collections concerning the arts and traditions of Puglia, wine, fabrics and clothing. In addition to this site Latiano also has two other museums: the museum of the history of the pharmacy and the Casa Museo Ribezzi-Petrosillo, where some interesting Messapi finds coming from the “Muro Tenente” archaeological park are exhibited. Just a short distance away we find the birthplace of the blessed Bartolo Longo, founder of the Sanctuary of the Madonna del Rosario di Pompei who was beatified on the 2 October 1980 by John Paul II. The religious architecture includes the Church of Santa Maria della Neve and the Church of the Santissimo Crocifisso.

Landscape is characterized by the presence of imponent secular olive trees that represent a significative share of local economy. From cultivation and growing of olives to production and bottling of olive oil knew in all national territory its mark DOP Terra D’Otranto. With its taste a bit spicy, olive oil is ideal to seasonal food but also to keep it; therefore, we have a rich production of in-oil food (marrows, peppers, aubergines, artichokes etc).

Stacchioddi “orecchiette” are a type of pasta, which has become the symbol of Puglia. It is dressed not only with turnip tops but also with a fresh tomato sauce, a sprinkling of cacio-ricotta or a spoonful of strong ricotta cheese. During Sunday lunches, families usually accompany their first course of orecchiette with rolls of horse meat (brascioli) and meatballs cooked in the sauce.

Pasta Reale
The famous Pasta Reale, typical of the farming and artisan culture of the Terra dei Messapi, is used in the preparation of many cakes and biscuits. Famous all around Latiano, is typical pastry made by almond and sugar shaped in different forms, oftein fruit or during Easter time for example shaped as a lamb usually stuffed with quince jam.

May: May Latianese – (During the month until June) Cattle fair at the Sanctuary of Cotrino – (5th May) Festivities in honour of the Madonna di Cotrino – (4,5 ,6).

July: Festivities in honour of Saint Margherita virgin and martyr and patron saint of Latiano (19th and 20th July).

August: Festa in Masseria (Feasts in Farmhouses) (Throughout the month).

October: La Fera più Sagra Feast of ti li stacchioddi: feast of the orecchiette, you can taste the typical dish of Latiano orecchiette with sauce with “li brascioli” (horse meat rolls) – (the first Sunday of the month). 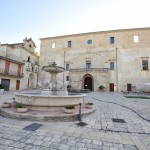 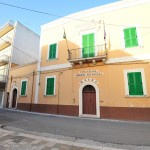 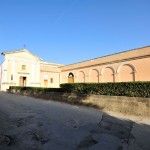 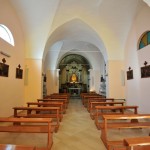 Born in Latiano in 1841 and famous for his Pompeian works, the Blessed Bartolo held dear the fortunes of his native land: the building of the basilica and the future of orphans and children of the inmates of Pompeii prison, renovation of churches and care of the faith, as well as of the elderly and the poor of Latiano. He was beatified on the 2 October 1980 by John Paul II.

Agesilao Flora [Latiano, 29th July 1863 – Lecce, 11th December 1952] was a fresco decorator and painter of Latiano. He was born in Latiano in July 1863, in a family of artists. His father Vito Nicola, a well-known painter too, was the kin of Abramo Flora, a popular wax sculptor, whose works are preserved in the museum of Capodimonte. He dealt with decorations, landscapes and papier-mâché.

Carlo Pignatelli [Latiano, 1944] is an italian entrepreneur and an international stylist. His brand is known in the world thanks to his ceremony male suits.

Armando Monasterio [Mercato San Severino, 30th August 1909 – Rome, 4th March 1992] was an italian partisan, trade unionist and politician. He died in Rome. His remains today are in the graveyard of Latiano, his adoption land.

Carmelo Conte, an international sculptor and painter, is one of the main characters of the new italian sculpture, with his active exhibitions in the most popular italian towns and abroad, content of two graduation thesis. He was born on the 9th July 1946 in Latiano and after the first years to the Art School of Grottaglie, he continued as a self-taught person. His artistic and human way is the result of his connection to the rural society and to the Mother Earth which becomes a woman, a mother and the Virgin Mary, arriving to the holy art, where he finds essence and spirituality, shaping substances and colors in a kind of ecstasy. Known are his Via Crucis, the altars, the bronze doors and the glass walls and his several monuments, among which “Al Carabiniere” in Francavilla, “Vittime del Caporalato”, in Oria, some other works in Pompei, in the north of Italy, France and Colombia.