On the Salentino plain, along the ancient Appia antica, we find Mesagne the historical centre of which is built in a heart shape. In its highest point we find the impressive Norman Swabian Castle, the most important monument of the town: the tower conserves a part of the defence works, such as the trapdoors and the guard posts, while the remaining part is of a more recent period. Not to be missed here is the interesting Museo Archeologico Territoriale Granafei, rich in numerous artefacts of the Messapi and Roman periods, findings from excavations of various archaeological areas in the district. The most significant of these is the Muro Tenente archaeological Park, a site of fundamental historical importance active since the 1960’s. Accessing the ancient part of Mesagne through the monumental Porta Grande, testimony of what were once the town walls, we can appreciate above all the religious architecture. Of great artistic interest particularly is the fine church of Sant’Anna, which looks over the piazza Orsini del Balzo, with its medieval layout, and the chiesa Madre dedicated to All Saints, an architectural jewel located in piazza IV novembre near the municipal library. Against the town wall, instead, we find the Celestinian convent, the Church of Santa Maria in Betlem, rebuilt in 1738 in Baroque style, and the Chiesa della Santissima Annunziata, once a place of worship of the Dominican monks.

Finally, in the new part of the town, well worth a visit are the basilica della Vergine Santissima del Carmelo and the sanctuary of Santa Maria Mater Domini, inside of which we can find the medieval icon depicting the Madonna col Bambino. Those looking for some refreshment in nature are advised to visit the Parco Baden Powell, in contrada Tagliata, a green lung for the town and an ideal destination for trekking, jogging and playing for children. For wine lovers of the typical cuisine there are numerous restaurants and inns spilling out inebriating smells into the little alleyways of the historic centre.

Monumental olive trees and Evo oil – Mesagne is the land of olive trees with 4000 hectares dedicated to growing the Cellina di Nardò and Ogliarola varieties, grown individually or combined in various percentages to create the Extra Virgin Olive Oil of Protected Origin Denomination (DOP) – Terre d’Otranto. The ancient underground oil mills are proof of this tradition.

The grapes and wines – Very fine DOC wines are produced from the skilful processing of the typical tree-trained and espaliered vines grown in the heart of local vineyards. The wineries of Mesagne can boast recognition of two DOCs: Ostuni DOC and Brindisi DOC, the latter reserved to red and rosé wines from vineyards composed of the Negroamaro grape.

The IGP brindisino artichoke – Among the vegetables we find the Brindisino artichoke which, in 2011, was awarded the IGP quality brand by the European Community. The area where the IGP “Brindisino Artichoke” is produced includes the whole Messapi territory: from Cellino San Marco to Mesagne, passing through San Donaci, San Pietro Vernotico and Torchiarolo. It is known for its particular sweet taste and tender texture. It is a product that can be eaten fresh, but is also processed and preserved in various ways. It forms the basis of many dishes: hors d’oeuvres, first and second courses and desserts. The fact that it is ready to be picked early in the season means that this local speciality can be found on markets starting from the month of October.
EVENTS

May Feast of Saint Giuseppe Artigiano (1st May). June Feast of Saint Antonio di Padova (13th May). July Feast of the patron saint of the Madonna del Carmine: on 15 July the statue of the Virgin is carried in procession from the basilica of the Carmine, where it is in the care of the Carmelite monks, to the Mother Church. Feast of Saint Anna (26th July).

December-January Christmas in the heart: events taking place from Christmas Eve until the Epiphany in the historic centre with exhibitions of cribs. Cavalcade of the magi: living crib. 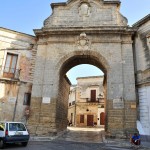 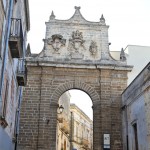 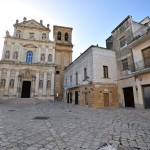 Catald’Antonio Mannarino [1568 – 1621] well-known intellectual, poet and medician of Taranto. His connection with Mesagne started with the Memories. In this work there were important genealogical signals, concerning Mesagne and short essays about the Beltrano family, feudatory of Mesagne. In this work, particularly in the 8th chapter, the poet tells about his love for Mesagne: “[…] this very noble Land of / Mesagne without reasons has the shape of a noble heart/ this homeland / because as the heart is the main part of the body, as a perfect organ, Mesagne is in the middle of this land as a noble homeland […]”. The news about Mannarino are few, for further information you can check the following page.

Epifanio Ferdinando [Mesagne, 2nd November 1569 – Mesagne, 7th December 1638] Epifanio Ferdinando (The Old) for the citizens the “Salento Socrates”, settled down in Naples in 1588 where he studied medicine, philosophy, geometry and maths before the graduation in Medicine and Maths in 1594. He came back to Mesagne where he married the 29 years old Giordana Longo Pecoraio, with whom he had 10 children. In Mesagne he worked as a doctor. He died the 7th December 1638. Intellectual man of learning, he wrote many works among which Antiqua Messapographia and Morso della Tarantola, the first one was a lecture about the history of Mesagne and the second one about the tarantula phenomenon.

Giovan Francesco Maia Materdona [Mesagne, 1590 – …] was an italian poet. His work Le Rime Pescherecce was published in Bologna in 1628. In 1629 it was published in Venice. Close to Giambattista Marino, after his death, he became deeply devout. Many of his works recall a subtle religiousness as in L’utile spavento del Peccatore (Rome 1649, Venice 1665 and 1671). His celebrity slowly broke up, in fact in the last years of his life, his traces got lost.

Francesco Muscogiuri [Mesagne, 11th January 1851 – Mesagne, 6th December 1919] was an italian writer. He was born in 1851 in Mesagne, which was part of the Naples Kingdom. In 1871 he left to Naples, for his journalist activity, there, his articles and his talent were noticed by Francesco De Sanctis, who incited him to attend University. Muscogiuri passed the exams and, after University, he taught literary subjects in several schools in Naples and elsewhere. Among his works, a volume with the title Colloqui di una giornata di studi and the pamphlet entitled La Leggenda dei Durazzo, an enthusiastic defense of the King of Naples Ladislao of Durazzo. When old, Muscogiuri came back to Mesagne where he died in 1919.

Giovanni Messe [Mesagne, 10th December 1883 – Rome, 18th December 1968] was an italian general and politician. One of the most famous italian generals of the Second World War. He got the Marshal of Italy degree and he performed as Head of the General Major State between 1944 and 1945.

Ubaldo Lay, as Ubaldo Bussa was known [Rome, 14th April 1917 – Rome, 27th September 1984],  was a Tv and theatre actor. He worked as a dubber. In 1944 he married Olga Bogaro, who was born in Mesagne, Brindisi, a town where the actor lived and was buried at the age of 67. The TV noir drama Il Tenente Sheridan is ascribable to Ubaldo Lay.

Carlo Molfetta [Mesagne, 15th February 1984] is an italian taekwondo athlete, Captain of the Taekwondo Italian National team, Olympic gold medal of the Olympic Games of London 2012, in the +80 kg category.