San Pancrazio Salentino is a village located on the Brindisi plain. The first settlements date back to the Messapi period, as shown by the archaeological findings in the area of Muro Maurizio and above all in the district of “Li Castieddhi”, just over a kilometre to the east of the village. Within the Archaeological Park, in addition to the ancient defence structures in large blocks of limestone, we can admire the characteristic village of huts, the oldest settlement of the Iron Age, dating back to the eighth century before Christ. Another particularly interesting area of San Pancrazio Salentino is Caragnuli, a district within an environment that has remained intact over the years with the presence of rock which has not allowed farming activities. Here, the grottoes, together with the ancient tufa caves in which they are located, create a spectacular landscape not to be missed. The settlement, composed of rupestrian dwellings of various sizes, is in a good state of preservation. The area can be reached by car as far as Masseria Caragnuli, now in a state of abandon and the outer limit of the rupestrian zone further to the south at Masseria Torrevecchia, today a holiday farm, we can visit the Grotta dell’Angelo:

This place was used in ancient times as a burial chamber and was reutilised in the later middle ages as a church, as can be seen by the fine frescoes decorating its inner walls. To the north again near Masseria Caragnuli traces of a medieval settlement are visible: both the “crypt” dedicated to Sant’Antonio Abate and an underground oil mill. In the inhabited centre finally just a short distance from each other, we find the Chiesa Madre dedicated to Saint Francis of Assisi, the Palazzo Municipale, the Palazzo Arcivescovile, the Chiesa della S.S. Annunziata and the Chiesa di Sant’Antonio Abate. The latter has fine mural paintings and ancient tombs under the floor. For those in search of simple and authentic flavours, a visit to one of the many wood- burning ovens to taste some of the excellent products, is recommended. The area is famous for the presence of top quality bush-trained vines grown in the style of Puglia that produce top quality wines and for the production of extra vergin Terra d’Otranto olive oil.

The EVO OIL – GRAPES AND WINES

Olive trees and vines dominate the rural landscape. “Celino” is the most wide-spread quality of olive whose Greek name derives from the black colour of the fruit. The extra virgin olive oil, obtained from the processing of this olive, is the protagonist of Salento tables.

Artisans: the baker – In the wood-burning ovens of the area we can find traditional products such as bread made from durum wheat flour or the friseddhra (frisella), rings of barley or durum wheat cut in half and baked until like biscuits. We mustn’t forget the taralli, rings of unleavened bread baked in the oven and sometimes flavoured with oregano, pepper or fennel seeds and also available in sweet versions, with wine, sugar or chocolate.  Humble, simple products which are always to be found on the tables of the Messapi.

CHINULIDDHRE – The Chinuliddhre are cakes filled with apple and grape jam, in various shapes, typically a half-moon or raviolo, to be served dusted in sugar. They are always to be found on local tables, especially at Christmas when they exude joy and the unmistakable scents of citrus fruits and cinnamon.

Saint Antonio Abate is known as saint of the fire and patron of animals because the popular culture has given him the faculty to protect all the stable animals and poultry. In the most diffused iconography, the saint is represented with a pig near him and a long stick with a little bell at the top in one hand, in the other a book were fire is painted. The patronage on the stable animals is surely the best-known aspect of the popular cult of Saint Antonio and symbolically survives through the blessing of animals. 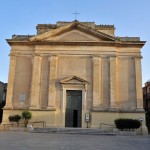 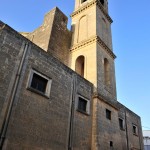 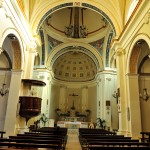 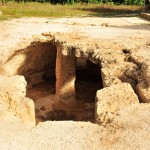 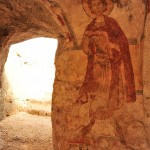 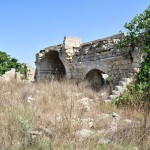 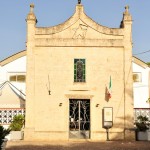 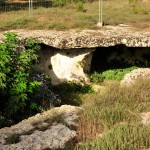 Don Salvatore Taurino […, …] was a priest of San Pancrazio. He is known because of some archeological discoveries, begun in 1961 in contrada Li Castelli, a km far away from the town, to the east side. That year Don Taurino reported some discoveries emerged during the tillage of the fields, parts of the fundament of old buildings, tombs and carparo blocks. Moreover, thanks to the studies and the researches, Don Salvatore Taurino brought some ancient relics of the Iron Age to the light.