The small village of San Donaci is located in the centre of a very interesting area from the point of view of nature and history. One of the greatest surprises it reserves the visitor in an often arid land dominated by the sun like the Salento, is that of suddenly encountering a marsh. “Li paduli” a natural basin into which the waters of the surrounding territories flow, is an area of great value in terms of nature due to the presence of numerous species of migrating birds. Another characteristic place is the Tempietto di San Miserino considered to be the most ancient place of worship in the Paleo-Christian age in the whole of the Salento. The structure today is partly in ruins; however it still has its typical domed roof. With its interior around 2 meters below the level of the surrounding countryside, traces can still be seen of the red plaster and, unlike the Byzantine frescos that characterise the inside of the temple, today totally disappeared, small traces of a mosaic with dark tesseras decorating the floor can still be appreciated. A short distance away there are also signs of the so-called “Limitone dei Greci”; this is a communication road which also represented a fortified defence line of the Terra d’Otranto, which identified the boundary of the Byzantine territories to the south with those of the Normans to the north. The history of San Donaci has developed along this path. It is proved by discoveries and finds made to the South of this road and immediately to the North near San Miserino, among which we remember the discovery of a Roman villa in contrada Palazzo, a Roman necropolis and the discovery of five Latin epigraphs in contrada Nicola Turco; the chance discovery of a Roman villa and the finding of a Roman necropolis near Masseria Falco. Moving to the centre of San Donaci the most significant architectural structures historically speaking are: the Castle, or the bishops Palace, the Chiesa Madre di Santa Maria Assunta, a fine example of Neoclassical architecture. It was built in 1899 on top of a previous church showing an elegant and simple facade and is dominated on one side by the bell-tower, visible from every corner of the village, crowned by a small octagonal dome typical of local traditions. The little church of Santa Maria delle Grazie, on the other hand, contains a fresco dating back to the XV century depicting the Madonna col Bambino.

OIL, WINE – The economy of San Donaci is based mainly on oil and wine. All of the wine production of the area boasts excellent labels distributed all over Italy and exported to the rest of the world. One of the oldest wine-producers is the historical Cantina Cooperativa of San Donaci, founded in 1933, famous not only for its production but also for its characteristic underground wine-cellar.

BAKED PRODUCTS – Baked products include the very popular friseddhra (frisella). This is ring-shaped and made from barley and durum wheat flour, cut in half and baked in the oven until hard so that it is easy to carry about. It is soaked for a few seconds in water and then dressed with tomatoes, garlic, anchovies, salt, oregano and extra virgin olive oil.

Home-made pasta – Home-made pasta made from durum wheat flour, water and the work of expert hands lives again in many families who still follow this old tradition today. As well as orecchiette, we can still find pizzarieddi and laiane (also called sagne ncannulate) on the traditional wooden boards.

The “Tavole di San Giuseppe” huge tables laid in honour of the saint can be found on 19th March of every year in the homes of citizens devoted to the saint. The families lay long tables with various traditional dishes (lampascioni, turnips, fried fish, pittule, etc). In the evening on the 18th of March the devotees cover the tables, as though they were little altars, with the most beautiful embroidered table clothes, fresh and sweet-smelling flowers, candles, traditional dishes lined up according to a precise symbology following ancient rules

May Open Wine Cellars – (Last Sunday of the month). 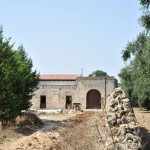