Torchiarolo, the southernmost town in the province of Brindisi has antique origins dating back to the Messapic period. Proof of this is given by the nearby ruins of the ancient city of Valesio, today an archaeological site of considerable historical importance. The first traces of the settlement date back to the Iron Age as far as the Late Middle Ages. Some of the jewels of this site are the circuit of the walls with the seven access doors, dating back to the IV century, arranged in the form of an irregular ellipse, and with a thickness of more than 5 meters the best preserved features of which are visible località Campisani, località Masseria Piccola and Masseria Grande. Not to be missed is the spa complex from the late Roman period where remains of great historical value and the pajara have been found. In the municipality of Torchiarolo however everything is concentrated into the very central “piazza Castello”: on one hand we have the Chiesa Madre named after Maria SS. Assunta, built at the end of the XVI century on top of a pre-existing building; at the centre of the square we find the Chiesa del Rosario, which contains an interesting painting of Saint Joseph dating back to 1715; while, on the opposite side we can see the Palazzo Baronale built in 1698, with a square tower and coping, it is the only testimony of the ancient defence system. Finally, also near the main square we find Palazzo Tarantini, interesting above all for its arched entrance with fortified tower. Leaving the centre, among the numerous rural chapels spread over the countryside we can admire the fine little church of the Madonna dei Galeano, built over a seventeenth century chapel, is home to an ancient fresco of the Madonna col Bambino and the chapel of the Madonna delle Grazie with its altar depicting Christ Pantocrator. The Torre Bartoli and the Torre Lo Muccio are also characteristic, built in the countryside around the town as outlook posts for enemies coming from the sea. In fact, Torchiarolo was one of the local towns most exposed to the raids of the Turks with whom the inhabitants engaged in ferocious battles. In fact the etymology of the name Torchiarolo seems to suggest that it comes from the term “turce”, used in the registers of the time to indicate a violent and barbarous killing. Moving towards the marine area we find an important nature oasis called Quatina, composed of a marsh under the sea and the dune of Lido Presepe.

Monumental olive trees and evo oil – The legend has it that the name of the Municipality derives from “torchio d’oro” (golden olive press), referring to olive pressing. One thing is certain: Torchiarolo is synonymous with olive groves and thanks to the work of man the authentic Extra Virgin Olive Oil is obtained, an oil with a clean, pure taste, the main element of the Mediterranean Diet. Oil is also the protagonist of the delicious vegetable preserves, which are produced as soon as the ingredients are picked; exquisite to eat, for example, with bread still hot out of the oven.

The bread of Torchiarolo – It has a golden crust without cracks, the crumb is deep and compact. It is obtained by working flour with water, allowing it to rise with a “mother” yeast and cooking it in wood-burning ovens. Excellent to eat dressed with some oil and tomato.

April Fair of Maria Santissima di Galeano – (from Easter Saturday to the following Tuesday). The Sanctuary of Torchiarolo is dedicated to the Madonna of Galliano or Galeano and was rebuilt where once a little VII or IX century church was located housing the medieval fresco of the Madonna and a part of the apse of the original temple.

June Feast of Sant’Antonio da Padova – (during the month).

October Feast of the patron saint of the Santissimo Crocifisso – (during the month). 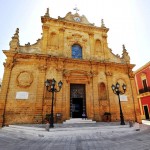 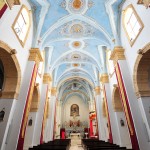 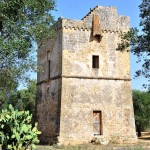 Pio Tarantini [Torchiarolo 1950] is a photographer and italian teacher. Expert of photos, he is interested in the social and geomorphological shades  of the territory. Among his first works, a social white and black photo report in 1972 which depicts his land and the prevalent decline aspects of the south of those years.

Crocefisso Maggio [Torchiarolo, 2nd May 1962] pool world champion, in the “Italian 5 skittles” specialty. His talent and his great creative abilities, make him the only one in this sport